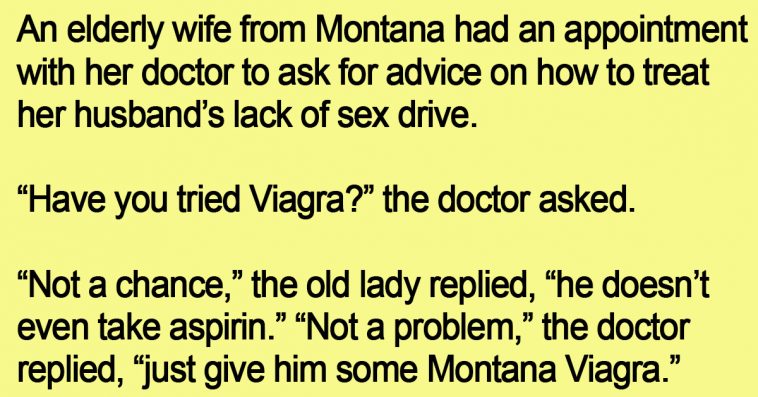 An elderly wife from Montana had an appointment with her doctor to ask for advice on how to treat her husband’s lack of sex drive.

“Have you tried Viagra?” the doctor asked.

“Not a chance,” the old lady replied, “he doesn’t even take aspirin.”

“Not a problem,” the doctor replied, “just give him some Montana Viagra.”

“It’s simple. You discretely put the Viagra into his coffee when he’s not looking. He won’t be able to taste it. Try it out and get back to me in a week and tell me about the results.”

A week later, the old lady called the doctor.

“Really? What happened?” the doctor replied.

“I did as you told me, I put the pill into the coffee, and the effect was immediate… he flew up from the chair, and his eyes were positively smoldering. With a quick motion he swept all the cups and the tablecloth from the table, ripped my clothes off and took me then and there on the table. It was a nightmare I tell you, a nightmare.”

“Oh, I see, but why was it so bad, shouldn’t this be a good thing?” the doctor asked in a worried tone.

“Oh yes, this was the best thing to happen to me in 25 years! But I can tell you right now, I will never be able to show my face in the downtown Starbucks again!”

At least it worked!