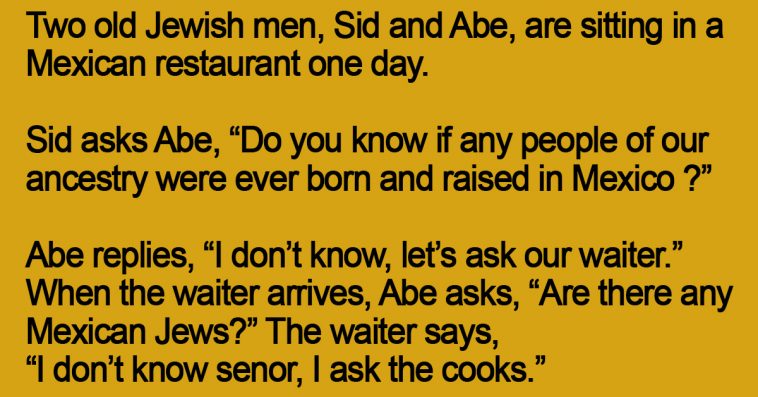 Two old Jewish men, Sid and Abe, are sitting in a Mexican restaurant one day.

Sid asks Abe, “Do you know if any people of our ancestry were ever born and raised in Mexico ?”

When the waiter arrives, Abe asks,

“Are there any Mexican Jews?”

He returns from the kitchen after a few minutes and says,

“No senor, the cook say no Mexican Jews.”

“Are you absolutely sure?”

The waiter, realizing he is dealing with “Gringos” replies,

“I check once again, senor,” and goes back into the kitchen.

While the waiter is away, Sid says,

“I find it hard to believe that there are no Jews in Mexico ..Our people are scattered everywhere.”

The waiter returns and says,

“Senor, the head cook Manuel, he says there is no Mexican Jews.”

“Are you certain?” Abe asks again.

“I just can’t believe there are no Mexican Jews!”

“Senor, I ask EVERYONE,” replies the exasperated waiter.

“All we have is Orange Jews, Grape Jews, Prune Jews, Tomato Jews and Apple Jews, but no Mexican Jews.”