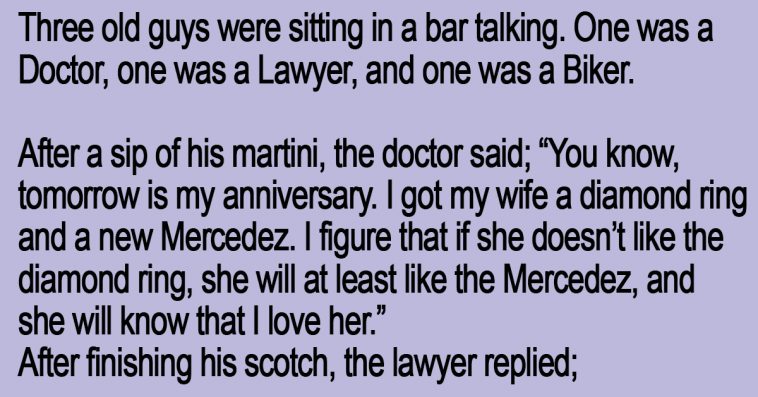 Three old guys were sitting in a bar talking.

One was a Doctor, one was a Lawyer, and one was a Biker.

After a sip of his martini, the doctor said;

“You know, tomorrow is my anniversary. I got my wife a diamond ring and a new Mercedez. I figure that if she doesn’t like the diamond ring, she will at least like the Mercedez, and she will know that I love her.”

After finishing his scotch, the lawyer replied;

“Well, on my last anniversary, I got my wife a string of pearls and a trip to the Bahamas. I figured if she didn’t like the pearls, she would at least like the trip, and she would know that I love her.”

The elderly Biker then took a big swig from his beer and said;

“Yeah, well for my anniversary, I got my old lady a tee-shirt and a v*brator. I figured if she didn’t like the tee-shirt, she could go f*** herself.”