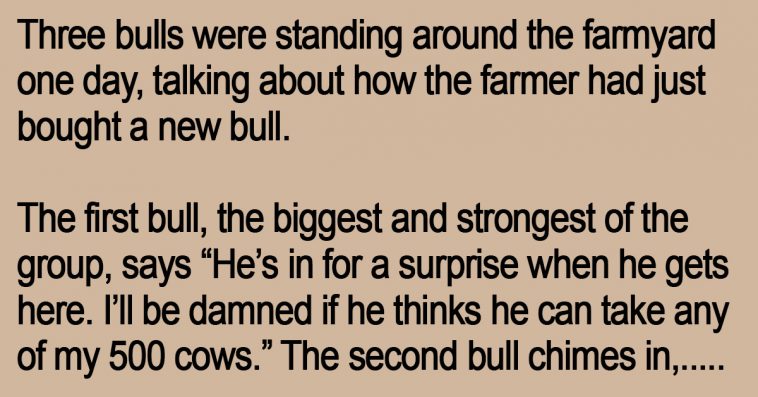 Three bulls were standing around the farmyard one day, talking about how the farmer had just bought a new bull.

The first bull, the biggest and strongest of the group, says

The second bull chimes in,

The third bull, the youngest of the bunch, pipes up and says

“I’ve only been here a year, I know I’m not as big and strong as you guys but I’ve earned my 10 cows and he’s not getting a single one!”

About this time, a large truck pulling a trailer backs into the ranch and begins to unload a 4,000 pound monster of a bull.

He is so big that the steel ramp is bending with every step he takes.

The youngest bull begins huffing and grunting and scraping the ground with his foot.

The oldest bull looks at him and says

“Son, use your head. Give up a few cows and live to tell about it.”

“Hell, he can have all of my cows, I’m just making sure he knows I’m a bull!”