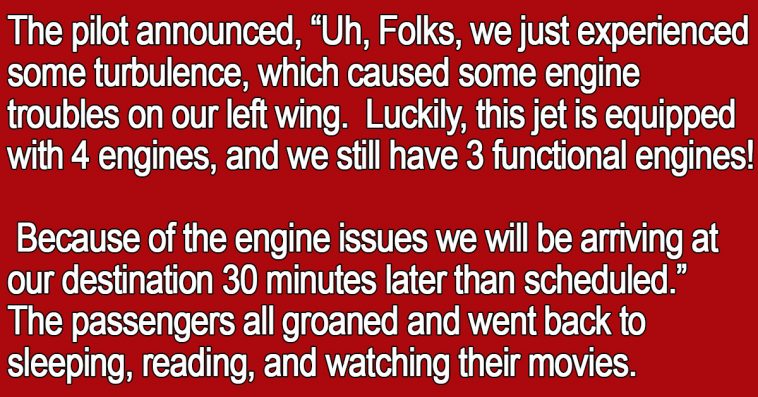 The pilot announced, “Uh, Folks, we just experienced some turbulence, which caused some engine troubles on our left wing. Luckily, this jet is equipped with 4 engines, and we still have 3 functional engines! Because of the engine issues we will be arriving at our destination 30 minutes later than scheduled.”

The passengers all groaned and went back to sleeping, reading, and watching their movies.

Not long afterwards, they felt more turbulence, and again heard the pilot say, “OK so we just lost our second engine, but not to worry, we are still running well on two engines. We will arrive at our destination 2 hours later than scheduled.”

The passengers exchanged worried looks and started talking among themselves.

Again, they felt the jet dip and rumble, and again, they heard the pilot say, “We lost our third engine, and we will arrive 4 hours later than scheduled at our destination. My apologies for the inconveniences this delay is causing all of you.”

This time, a frustrated looking passenger wearing a business suit stood up and yelled,

“Sacrebleu!, if we lose another engine, we’ll be stuck up here all day!”