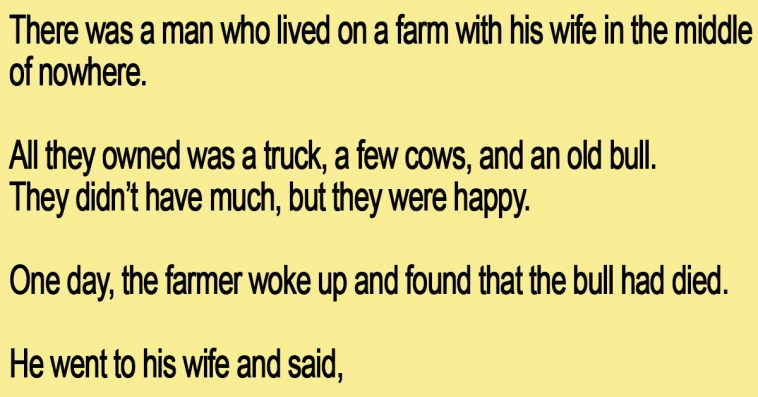 There was a man who lived on a farm with his wife in the middle of nowhere.

All they owned was a truck, a few cows, and an old bull.

They didn’t have much, but they were happy.

One day, the farmer woke up and found that the bull had died.

He went to his wife and said,

“I take our money into the town and buy us a new bull. I know you need the truck here to keep the farm running, so when I get us a bull, I’ll send you a telegraph so you know when to pick us up.”

His wife went and got the money and then said goodbye.

The farmer arrived in town late that day and had to get a hotel room.

The next morning he only had 401 dollars left.

He went to the market and was able to buy a strong, young bull with the 400 dollars.

It had been a long time since he had been to town, but as long as the telegraph prices hadn’t gone up, he should be able to send a full sentence to his wife with his dollar.

When he arrived at the post office, he said to the telegraph operator:

“I need to send a message to my wife so she can pick up my bull and me. How much is a word?”

“Prices went up a few years ago,” replied the operator.

He thought for a little while and then said,

“Comfortable? Are you sure?” asked the operator.

“My wife has a 4th-grade education,” the farmer replied.

“When she reads she has to sound each word out syllable by syllable. So when she sees the word comfortable, she’ll read it as ‘come-for-ta-bull.’”