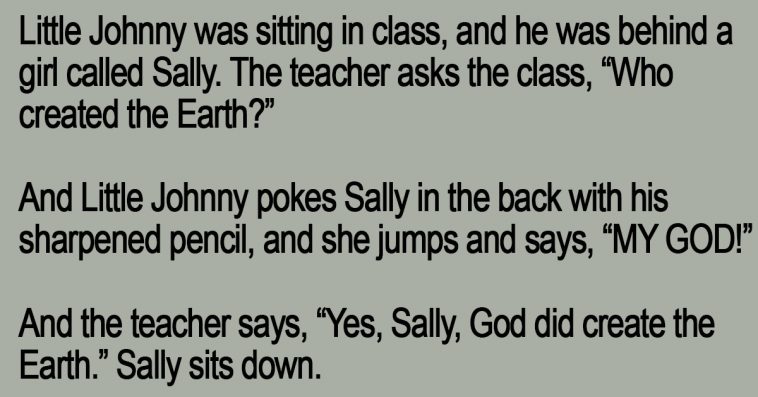 Little Johnny was sitting in class, and he was behind a girl called Sally.

The teacher asks the class, “Who created the Earth?”

And Little Johnny pokes Sally in the back with his sharpened pencil, and she jumps and says, “MY GOD!”

And the teacher says, “Yes, Sally, God did create the Earth.”
Sally sits down.

Then, the teacher asks, “Where do you go after you live a good life?”

and Little Johnny pokes Sally again, and she jumps up and says, “HEAVENS TO BETSY!”

And the teacher says, “Yes Sally. You will go to heaven after you live a good life.”

And then, the teacher asks the class, “What did Eve say to Adam after their 77th child?” and Little Johnny pokes Sally HARDER this time in the back, and Sally jumps, turns around and says,

“If you stick that thing in me one more time, I swear I’m gonna lose it!”

And the teacher faints.