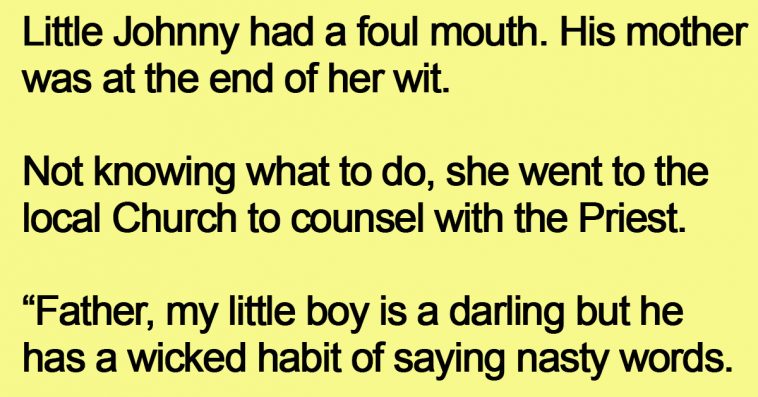 Little Johnny had a foul mouth.

His mother was at the end of her wit.

Not knowing what to do, she went to the local Church to counsel with the Priest.

“Father, my little boy is a darling but he has a wicked habit of saying nasty words. I don’t know where he learnt them but he says things that would make a sailor blush! What do I do?”

“Well, do you give him an allowance?”

“Yes, ten dollars. Should I take his allowance?”

“No, that would cause more harm than good. Instead, you will tell him that, for every bad word he says, you will deduct a penny from his allowance. At the end of the month, he will donate the deducted money to the Church as a way to ask for forgiveness. That will teach him the consequences of his actions and also value his money.”

The mother was glad about the plan and did so. At the end of the month, little Johnny came to the Church to pay for his language.

“So, my son,” said the Priest. “How many bad words did you spoke this month?”

“NINE HUN–” the Priest sighed. “Well, I hope this will teach you a lesson about controlling that tongue of yours. So, pay up, $ 9.99 from your allowance”

Pulling a face, the boy passes a ten-dollar bill to the Priest.

“No problem, Father, go f*ck yourself, and now we are even.”