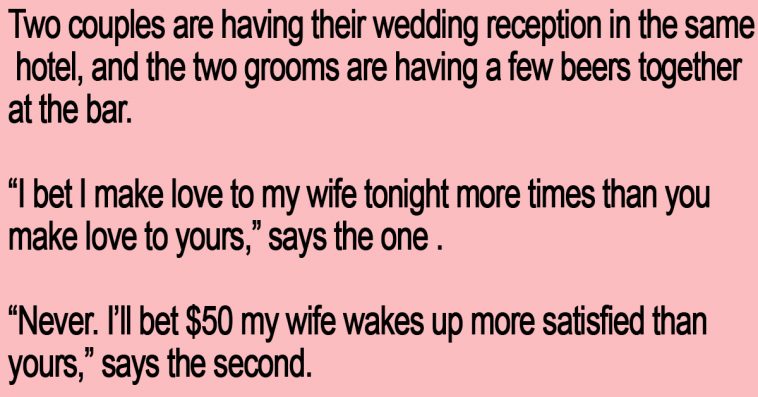 Two couples are having their wedding reception in the same hotel, and the two grooms are having a few beers together at the bar.
“I bet I make love to my wife tonight more times than you make love to yours,” says the one .
“Never. I’ll bet $50 my wife wakes up more satisfied than yours,” says the second.
“Right, you’re on. But how will we tell which one of us has won?” says the first.
“Easy. When we come down for breakfast tomorrow, just order the same number of slices of toast as the number of times you made love.” says the second.
The following morning both couples are at breakfast, and both grooms are smiling as the waiter comes to take the order.
The first chap leans over –
“I’ll have a full English breakfast, and SIX slices of toast” he smiles, winking at the second chap.
The second chap leans over and says in a loud voice –
“I’ll also have a full English breakfast and SEVEN slices of toast — and make 2 of them brown!”