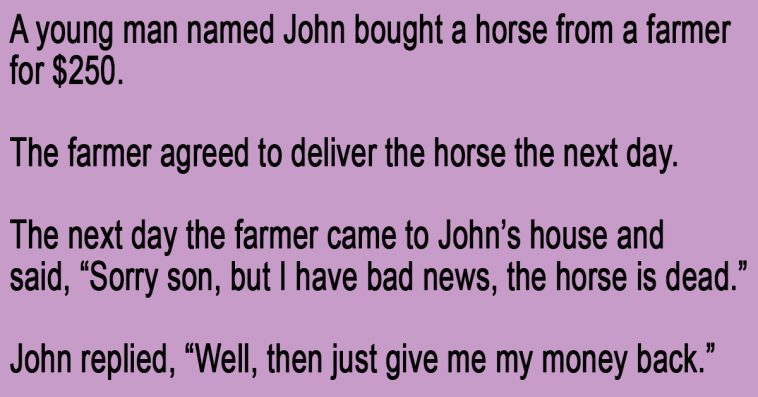 A young man named John bought a horse from a farmer for $250.

The farmer agreed to deliver the horse the next day.

The next day the farmer came to John’s house and said, “Sorry son, but I have bad news, the horse is dead.”

John replied, “Well, then just give me my money back.”

The farmer said, “I can’t do that. I went and already spent it. ”

John said, “Okay, just bring me the dead horse then.”

The farmer asked, “What ya gonna do with him?”

John said, “I’m going to raffle him off.”

The farmer said, “You can’t raffle off a dead horse!”

John said, “Of course I can Watch me. I just won’t tell anybody he’s dead.”

A month later, the farmer met John and asked him, “What happened to that dead horse?”

The farmer said, “Nobody complained?”

John said, “Just the guy who won. So I gave him his five dollars back.”