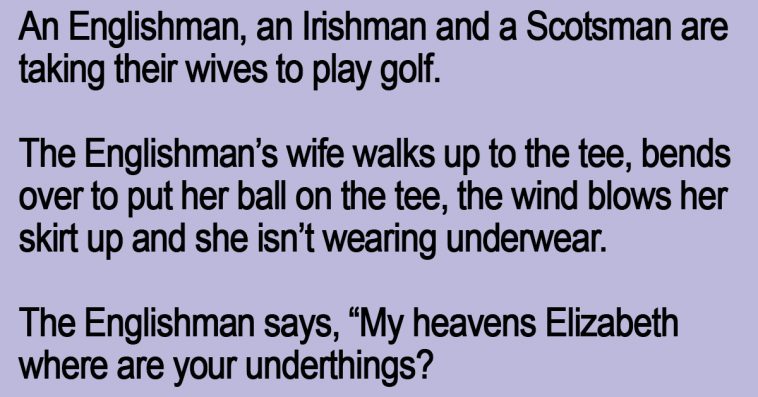 An Englishman, an Irishman and a Scotsman are taking their wives to play golf.

The Englishman’s wife walks up to the tee, bends over to put her ball on the tee, the wind blows her skirt up and she isn’t wearing underwear.

The Englishman says, “My heavens Elizabeth where are your underthings?

She replies “Reginald, on the money you give me for the household, I can’t afford underthings”.

The Englishman pulls a 50 out of his pocket, hands it to her and says “Well here, get yourself some proper underthings.

The Irishman’s wife steps up, bends over to put her ball on the tee, the wind blows her dress up and she isn’t wearing underwear.

The Irishman says ” Good Lord Agatha, where are your bloomers?”.

She replies “On the household money ya give me, I can’t afford any bloomers”.

The Irishman pulls a 20 out of his pocket, hands it to her and says “Get yourself some decent bloomers”.

The Scotsman’s wife walks up, bends over, the wind blows her dress up and, of course, she’s not wearing underwear.

The Scotsman blurts out “What the f#$k woman, where’re ya damn knickers?”.

She replies “On the wee bit of money ya gimme for the house I canna ‘ford no damn knickers.

He reaches in his pocket, pulls out a comb and says “Well, tidy yourself up a bit”.