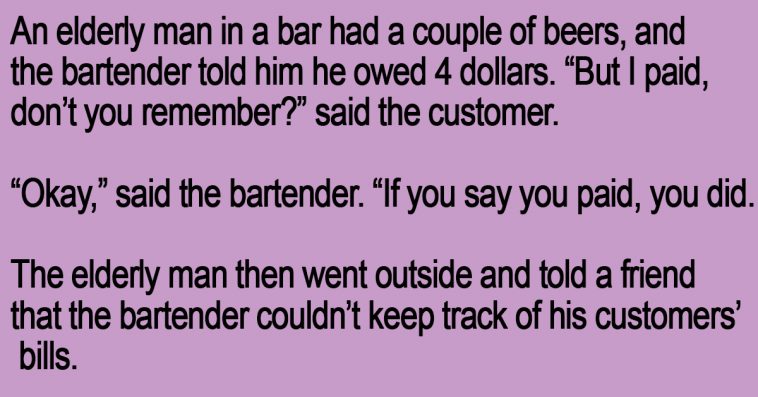 An elderly man in a bar had a couple of beers, and the bartender told him he owed 4 dollars.

“But I paid, don’t you remember?” said the customer.

“If you say you paid, you did.

The elderly man then went outside and told a friend that the bartender couldn’t keep track of his customers’ bills.

The second man then rushed in and ordered a beer.

When it came time to pay he pulled the same stunt.

The barkeep replied, “If you say you paid, I’ll take your word for it.”

Soon the customer went into the street, saw an old friend, and told him how to get free drinks.

The elderly man hurried into the bar and began to drink high balls when, suddenly, the bartender leaned over and said,

“You know, a funny thing happened in here tonight. Two men were drinking beer, neither paid and both claimed that they did.

The next guy who tries that is going to get punched right in the nose.”

“Don’t bother me with your troubles,” the final patron responded.

“Just give me my change and I’ll be on my way.”