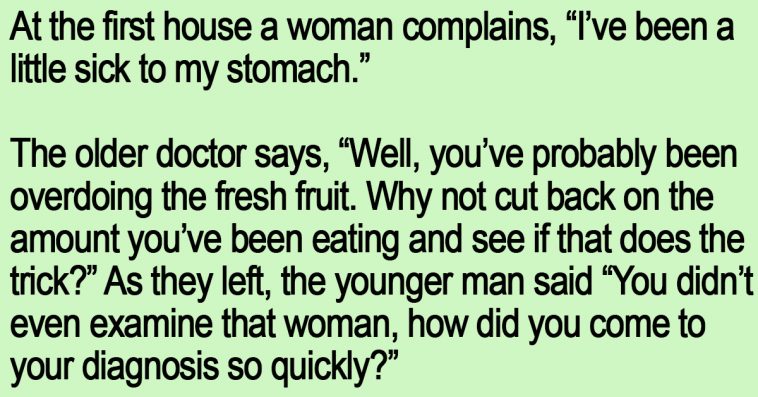 At the first house a woman complains, “I’ve been a little sick to my stomach.”

The older doctor says, “Well, you’ve probably been overdoing the fresh fruit. Why not cut back on the amount you’ve been eating and see if that does the trick?”

As they left, the younger man said “You didn’t even examine that woman, how did you come to your diagnosis so quickly?”

“I didn’t have to examine her. You noticed I dropped my stethoscope on the floor in there? Well, when I bent over to pick it up, I noticed a half dozen banana peels in the waste bin. I knew that was what probably was making her sick.”

The younger doctor said “Pretty clever. If you don’t mind, I think I’ll try that at the next house.”

Arriving at the next house, they spent several minutes talking with a younger woman. She just didn’t have the energy she once had and said “I’m feeling terribly run down lately.”

“You’ve probably been doing too much for the Church,” the younger doctor told her. “Perhaps you should cut back a bit and see if that helps.”

As they left, the elder doctor said, “I know that woman well. Your diagnosis is almost certainly correct, she’s very active in the church but how did you arrive at it?”

“I did what you did at the last house. I dropped my stethoscope and when I bent down to retrieve it, I noticed the vicar under the bed.”