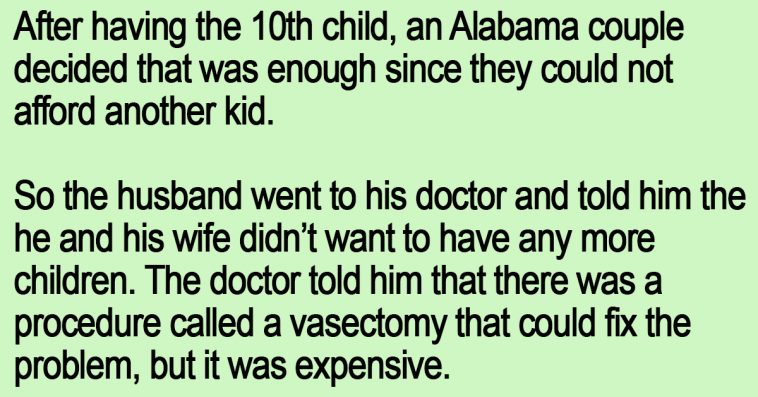 After having the 10th child, an Alabama couple decided that was enough since they could not afford another kid.

So the husband went to his doctor and told him the he and his wife didn’t want to have any more children.

The doctor told him that there was a procedure called a vasectomy that could fix the problem, but it was expensive.

A less costly alternative, said the doctor, was to go home and get a cherry bomb, light it, put it in a empty beer can and then hold the can up to his ear and count to 10.

The guy said to the doctor, “I may not be a smart man, but I don’t see how putting a cherry bomb in a beer can next to my ear is going to help me.” He wanted a second opinion so he visited a doctor in Georgia.

That doctor began to speak of a vasectomy, but seeing his patient was from Alabama, he told him to go home and get a cherry bomb light it and put it in a empty beer can and then hold the can up to his ear and count to 10.

Since the second doctor told him of the same procedure of the first doctor he decided that it MUST work. So the man went home, lit the cherry bomb and put it in the beer can.

He held the can up to his ear and began to count: “1,2,3,4,5” at which point he paused, placed the beer can between his legs and resumed counting on his other hand.