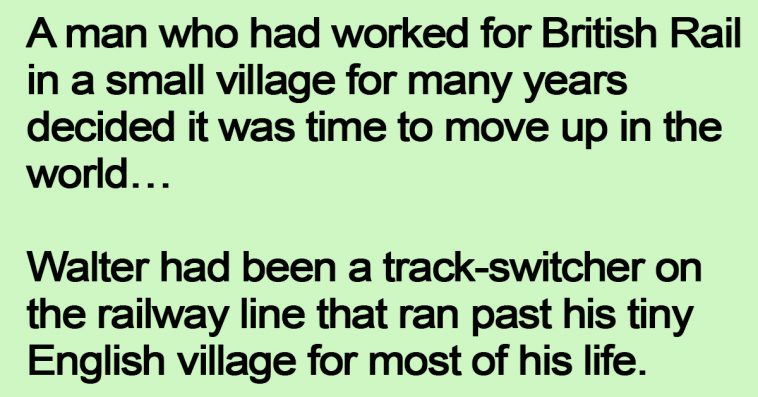 Walter had been a track-switcher on the railway line that ran past his tiny English village for most of his life. All day long he sat in his little hut and switched the points as trains approached.

One day he got it into his head that it was time to move up in the world, so he wrote to British Rail and asked to be considered for a promotion. He was invited to come to head office in London and speak to a manager.

After the usual job interview stuff, the manager decided to test Walter’s knowledge and decision-making abilities.

“Now Walter, imagine you’re in your hut, and you see that two trains are approaching each other head-on. What do you do?”

“Oh, that’s easy. I give one a stop signal, give the other one a go-slow signal, then I switch the points to put one into the siding while the other passes.”

“Okay, but on this day there’s a power failure, and the signal lights aren’t working. What do you do?”

“I’ll just get out my emergency flags and set those up, then switch the points by hand.”

“Oh, but it’s a foggy morning and the flags won’t be visible.”

“That’s fine, I’ll just use my flares instead.”

“Ah, but when you go to fetch your flares, you find that they’ve been stolen!”

“Oh, in that case I’d run home and fetch my kids.”