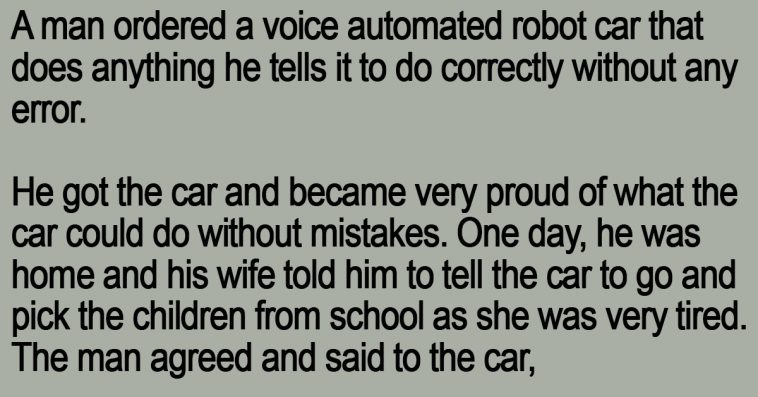 A man ordered a voice automated robot car that does anything he tells it to do correctly without any error.

He got the car and became very proud of what the car could do without mistakes.

One day, he was home and his wife told him to tell the car to go and pick the children from school as she was very tired.

The man agreed and said to the car,

“Car! Go and bring my children from school.”

The car went and didn’t return in time as expected, they knew something must be wrong.
Several hours later and with no car, the man became apprehensive.

He dressed up and got ready to lodge a report at the police station.

As he and his wife stepped outside they saw the car coming with an overload of children.

The car parked right in front of them and said,

“These are your children, sir.”

In the car, were their Landlady’s two daughters, their choir mistress’ two sons, his wife’s best friend’s daughter, their pastor’s son and their neighbour’s two sons.

The wife who was angry shouted at her husband,

“Don’t tell me all these are your children!”

The man asked her calmly,

“Can you first tell me why our children are not in the car?”