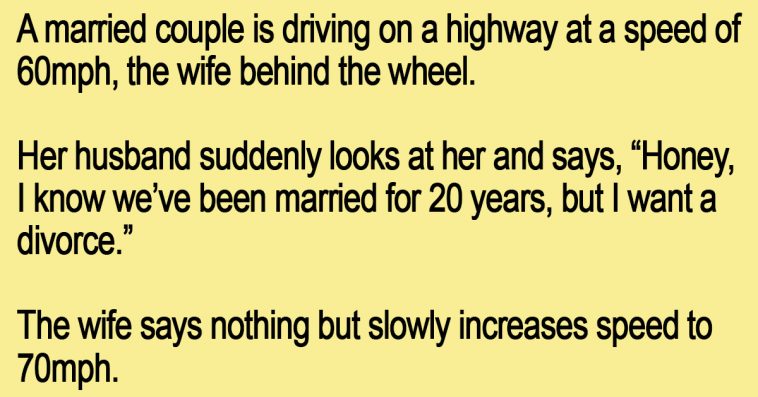 A married couple is driving on a highway at a speed of 60mph, the wife behind the wheel.

Her husband suddenly looks at her and says, “Honey, I know we’ve been married for 20 years, but I want a divorce.”

The wife says nothing but slowly increases speed to 70mph.

Then the husband says, “I don’t want you to try to talk me out of it because I’ve been having an affair with your best friend, and she’s a better lover than you are.”

Again, the wife stays quiet but speeds up as her anger increases.

“I want the house,” he says, pressing his luck.

Again, the wife speeds up to 80mph.

He says, “I want the car too”, but she just drives faster and faster. By now she’s up to 90mph.

“Alright,” he says, “I want the bank accounts and all the credit cards, too.”

She slowly starts to veer toward a bridge.

This makes him a bit nervous, so he says, “You don’t want anything?”

The wife says, “No, I’ve got everything I need.”

Right before they slam into the wall at 100mph, the wife smiles and says, “The airbag.”