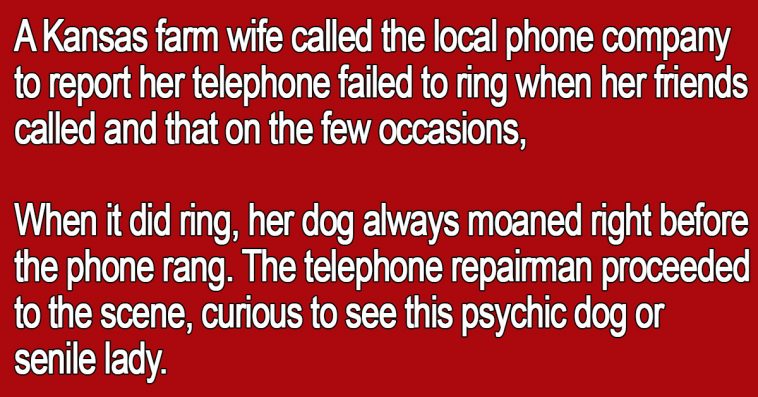 A Kansas farm wife called the local phone company to report her telephone failed to ring when her friends called and that on the few occasions,

When it did ring, her dog always moaned right before the phone rang.

The telephone repairman proceeded to the scene, curious to see this psychic dog or senile lady.

He climbed a telephone pole, hooked in his test set, and dialled the subscriber’s house.

The phone didn’t ring right away, but then the dog moaned and the telephone began to ring.

Climbing down from the pole, the telephone repairman found:

1. The dog was tied to the telephone system’s ground wire with a steel chain and collar.

2. The wire connection to the ground rod was loose.

3. The dog was receiving 90 volts of signalling current when the number was called.

4. After a couple of jolts, the dog would start moaning and then urinate.

5. The wet ground would complete the circuit, thus causing the phone to ring.

This demonstrates that some problems CAN be fixed by p!ssing and moaning.