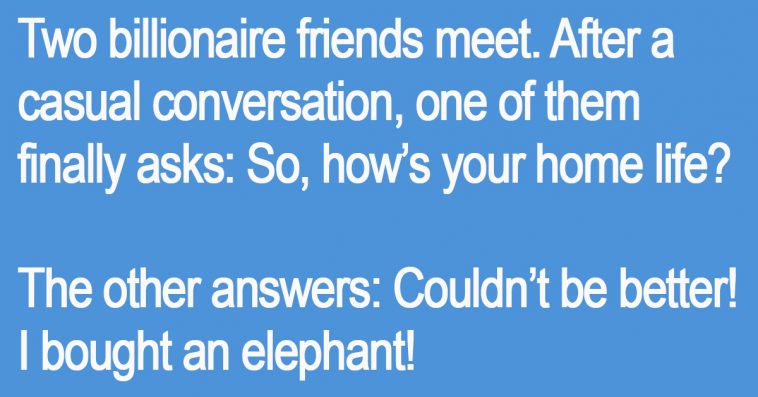 Two billionaire friends meet. After a casual conversation, one of them finally asks: So, how’s your home life?
The other answers: Couldn’t be better! I bought an elephant!

The other guy looks at him astonished: An elephant? Have you gone mad?

The guy replies, smiling: Oh, man, let me tell you, it’s the best purchase in my life! He’s grazing on the lawn, making it nice and even. Kids love him! Always riding his back and sliding down his trunk, keeps them outside instead of in front of the screen all day. My wife loves him too! He’s super strong, helps her with moving things around when I’m not home. And let me tell you, the best thing is: it’s kind and smart – the best pet I’ve ever had!

The other billionaire scratches his chin. ‘Yeah, that sounds… Kind of amazing actually! How much did you pay for him?’

The guy replies: ‘A million bucks! Worth every penny, it’s a steal at this price.’

The other billionaire says: ‘Sell him to me for two million?’

‘No, what are you saying? Sell him? His like family!’

‘I don’t know, man… You really can’t put a price on this kind of friendship and usefulness!’

‘Five million?.. Well, okay man, I’ll sell him to you, but only because we’re friends’.

In a few weeks the two billionaires meet up again. The guy who bought the elephant is angry as hell. As soon as he sees the other guy, he starts yelling:

‘What THE HELL did you sell to me?? Not only does he NOT graze the lawn, he completely destroyed all my greenery and trees! There’s elephant dung EVERYWHERE, it smells even inside the house! And what was that about kids? They are TERRIFIED of the thing, it’s aggressive and massive, and scary! I cannot sleep because he trumpets ALL THE TIME. My wife has been having nightmares, and now I won’t hear the end of her bickering until I die! IT’S AWFUL, worst purchase in my life!’

The other billionaire looks at him and says:

‘Well, man, I don’t know what to say, with that attitude, you’ll never sell an elephant!’